Straight six Chevrolet crankshafts from these engines will interchange. There are 3 basic crank types.

The 292 cubic inch straight six engine has a different conrod journal diameter. When swapping cranks it is recommended both crank & rods be swapped as an assembly.

Some parts that will & wont interchange between Chevy engines
starter motors,

Most chevy sixes run a through bell housing starter motor

Do not interchange with small block or v6 chevys as the pulley on the balancer is integrated with the balancer, bolt on pulleys are used to run air con,power steering & air pumps.
Push rods,

The pushrod length on the chevy six is a length of its own & will not interchange with small or big block Chevrolets
Conrods & rod bearings,

Due to rod length & big end sizes they do not interchange with v8 engines.
rocker arms & roller rockers,

Despite having a ratio very similar the rocker length is not the same
camshafts and timing gear sets,

The 292 chevy six does not interchange with the smaller cube engines.
Fuel pumps,

292 Chevrolet straight six engines had the fuel pump switched to the other side of the engine block, The lobe on the camshaft that operates the fuel pump lever is not in the same location as the smaller cubic inch engines.

Distributors
from v6 Chevrolet, small or big blocks do not swap either
Information that can also be useful.
crankshaft tunnel alignment is very important when changing rotating assemblies .
Crankshaft weights on casting # 407/407N are 10 lbs lighter than crankshaft casting # 802 the conrod,piston,flywheel & harmonic balancer weights will also need to be matched if swapping cranks.
Cylinder heads can be shaved .060 to .080 without affecting the head face.
Head bolt bosses that run through the intake ports can provide more airflow if reduced and reshaped or removed & replaced with crush tubes
It is a known problem that the blocks can get cracks from the head bolt on the front drivers side to the water pump. This can be prevented by installing head studs when rebuilding,
Any straight six Chevy engine made before 1975 was not designed to run unleaded fuel. It is advised to fit hardened valve seats & higher grade exhaust valves to over come future problems
Fiber camshaft timing gears run a lot quieter than steel or aluminum cam sprockets. The down side is they can strip at any time & is more prone in older engines. It is advised if you are changing your camshaft or hotting up your chevy inliner that both cam & crank gears be replaced as they are designed to be run as a matched set.

Cylinder head torque settings on chevy inline 6 cylinder engines should be pulled down in 3 stages.

always start in the center & go from left to right & work out towards the ends.

Not Just A Pretty Face

To view more details click on the image below 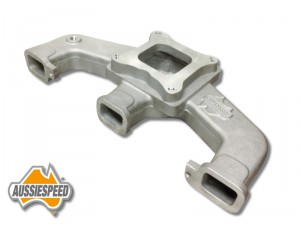